KUPWARA: Mohammad Ashraf Sehrai was laid to rest at the family’s ancestral Tekipora graveyard in Lolab, early Thursday morning. His posthumous ride from Jammu to Tekipora, the family said cost them Rs 22,000 that a private ambulance charged. 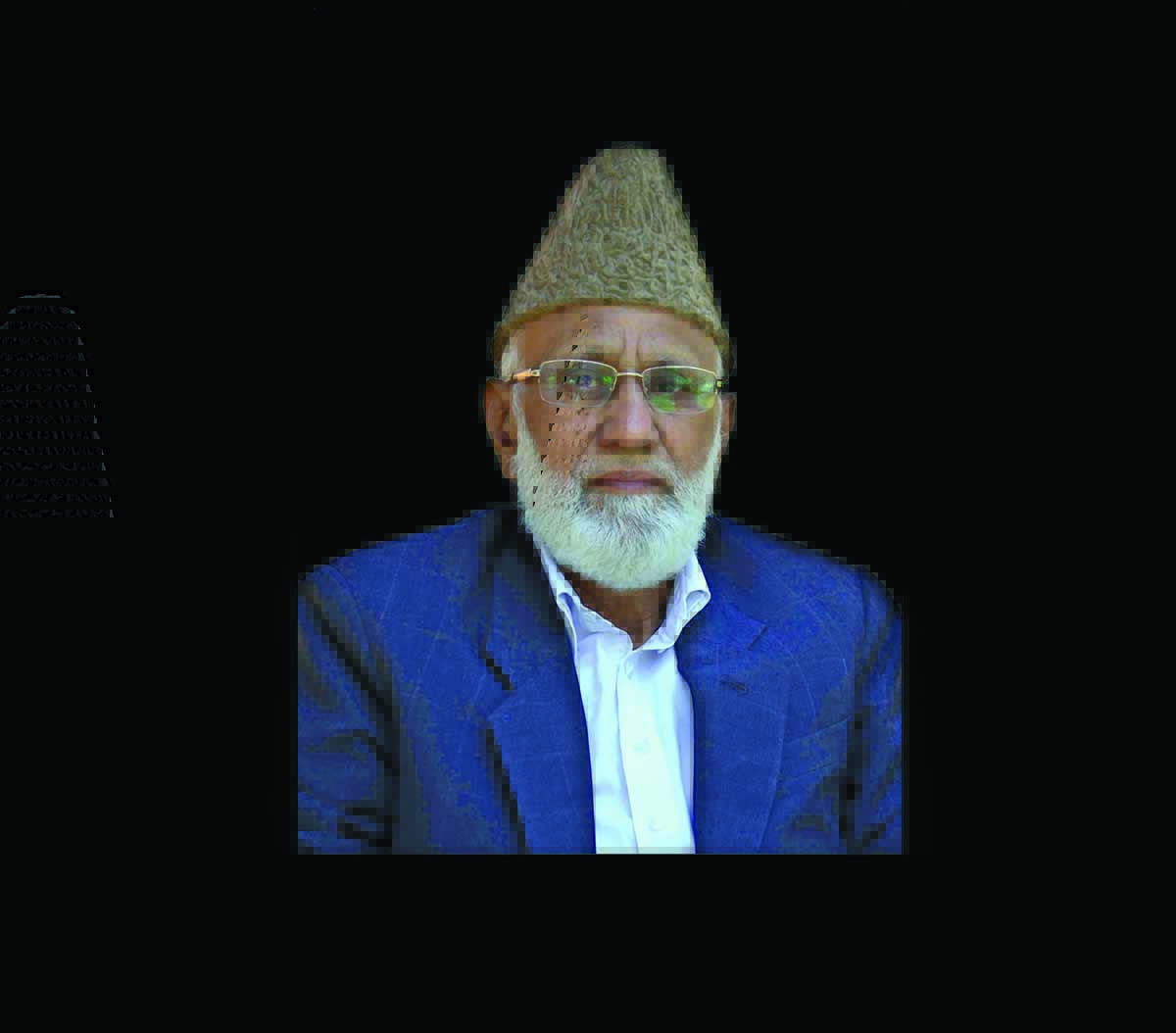 Authorities had put elaborate restrictions on the entry of people from outside and even preventing residents from joining the funeral. His coffin reached the village at around 4 am.

“Emotional scenes were witnessed as Sehrai’s son could be seen bidding adieu to his father after kissing his face repeatedly while other family members including some female ones were seen wailing and seeking forgiveness from the deceased before the 77-year-old leader was laid to rest,” a local news gatherer reported.

Family sources said that only close relatives, not more than 25, were allowed to participate in the funeral prayers. In Jammu, authorities had declared the dead separatist, a Covid-19 positive case, after his death.

“Police said Sehrai had tested Covid positive in a RT-PCR test report, which came after his death. He had earlier tested negative in a rapid antigen test,” Hindustan Times reported. “PTI quoted officials claiming he had Covid-19 symptoms and his oxygen levels had fallen.”

“The family was told by the local police station to attend the funeral prayers with restricted numbers,” Sehraie’s eldest son, Mujahid Ashraf alleged. “If you will not abide by it, the dead body will be buried at Matchil (Kupwara) or Sheeri (Baramulla). So, only 20-25 members from family attended the funeral.”

Admitting that his father was being permitted to talk to his family in Srinagar on phone on weekly basis, Ashraf Junior said, it usually would happen on Monday and Friday. It would be a 10-minute call, he said.

“Nearly a fortnight back, Abu made a phone call on Monday morning and said his health is not good, he is having body ache, (and sort of) feebleness,” the son said. He said his father had undergone eye surgery two years back and was losing his eyesight too. “He said (on phone) he is not getting a cure as the medical facilities are inadequate.” For 10 months, he had never been put to an eyesight test.

“On Tuesday morning my younger brother Rashid Ashraf received a call from jail authorities (from) Udhampur saying the health of Sahrai is not good (and) he has been shifted to Government Medical College Jammu from Udhampur hospital,” the son claimed. “Rashid asked him for reasons and he was told that he is having loose motion”.

Ashraf Jr said he rang up his friends and relatives in Jammu and sent them to the hospital, where they found him unwell. “(They said) he is having severe pain and oxygen saturation was 70,” the son said. “On Wednesday, I took flight from Srinagar to Jammu at noon, after visiting Saddar Police station, located at Bhagat Srinagar, and requesting them to make a phone call to Jammu hospital to ask about my father’s health condition and they issue me curfew pass too”.

“At 12:30 pm, I reached Jammu Airport where I was supposed to undergo a Rapid Antigen Test for Covid-19. While testing two other tested positive due to which I got late, in the meantime I received a call from the hospital that Abu has passed away”, the son said. “When I reached the hospital I met with SHO I asked him about Abu that is he Covid positive or negative but he avoided to answer”.

The son alleged that for hours, he was not allowed to go inside. Even the DG Prison washed his hands off saying there are protocols in place. “I insisted doctors not go for post-mortem, but they asserted that it is mandatory as he died in custody”. Sehrai’s son is still confused if his father was Covid-19 negative or positive. “I was asked to take the body in a coffin and get it myself. I was not even offered Ambulance from the hospital which I later took private”.

They left Jammu at 7 pm and reached Kupwara at 3:30 am. In between, he alleged they were stopped at Udhampur, and Ramban. At Banihal, he said there were nearly ten police cars and a number of cops. “Around 3:30 am, we reached SP Office Kupwara where I was offered a single banana for sehri.”

Sehrai, 77, is survived by his wife, Sara Ashraf, three sons – Khalid Ashraf, Rashid Ashraf, and Mujahid Ashraf – and two daughters, Sehraie’s fourth son, Junaid, was a militant and was killed in a gunfight in 2020 Ramzan. He was arrested soon after he led funeral prayers for his slain son in absentia.

The condolences continue to pour from across Jammu and Kashmir. So far, there were only two individual politicians who were vocally from the very moment, Sehrie was declared dead – Mehbooba Mufti and Sajaad Lone.

“Deeply saddened to know about Ashraf Sehrai sahab’s sudden demise. Like him countless political prisoners & other detainees from J&K continue to be jailed purely for their ideologies & thought process. In today’s India one pays a price with his life for dissent,” former Chief Minister, Mehbooba Mufti wrote on her Twitter. “The least GOI can do in such dangerous circumstances is to immediately release these detainees on parole so that they return home to their families.”

Deeply saddened to know about Ashraf Sehrai sahab’s sudden demise. Like him countless political prisoners & other detainees from J&K continue to be jailed purely for their ideologies & thought process. In today’s India one pays a price with his life for dissent.

Former minister and Apni Party President Altaf Bukhari also expressed his deep shock and grief over the demise of Ashraf Sehrai. Bukhari extended solidarity with the bereaved family and prayed for eternal peace to the departed soul. “I pray to almighty Allah to grant Jannat to Sehrai Saheb, and give courage to his family to bear this huge loss. Apni Party stands in solidarity with Sehrai Saheb’s family at this difficult period of time,” reports attributed to Bukhari said.

Peoples Conference Chairman Sajad Lone wrote a series of tweets on Sehraie, the man he knew from his childhood.

“Ashraf Sehrai Sahib passes away. A long political career comes to an end. Ashraf Sahib struggled all his life. A Jamaat ideologue. When I was 19, I bumped into him and He told me Tel ur father —kitney haseen hain terey lab ki galiyan dekey bemaza na hua. May Allah grant him Jannat,” Lone wrte in one of his tweets. “This is the irony of Kashmiri politics. Top quality politicians consumed by the conflict. The ideological versatility of Kashmir politics is a curse. A transparently honest politician spent decades in jail.”

Ashraf Sehrai Sahib passes away. A long political career comes to an end. Ashraf Sahib struggled all his life. A Jamaat ideologue. When I was 19 I bumped into him and He told me Tel ur father —kitney haseen hain terey lab ki galiyan dekey bemaza na hua.May Allah grant him Jannat

In a separate tweet, Lone added: “And why did he have to die in incarceration and not at his home amongst his kin and loved ones. Have we become so weak that an old infirm dying person is a threat to the state. I am not being critical. But please introspect. Seharai Sahib was a political leader not a terrorist.”

And why did he have to die in incarceration and not at his home amongst his kin and loved ones. Have we become so weak that an old infirm dying person is a threat to the state. I am not being critical. But please introspect. Seharai Sahib was a political leader not a terrorist.

Senior National Conference leader Choudhary Mohammad Ramzan also expressed his grief over the demise of Sehrai. In a condolence message issued here, Choudhary termed the demise of Sehrai a great loss for Kupwara and the whole valley, “his passing away has created a void in valley, which will not be easy to fill for many years,” he said.

“Death of Mohammad Ashraf Sehrai brings home the point that the government must ensure the wellbeing of Kashmiri prisoners lodged across jails in the country,” Dr Farooq Abdullah was quoted saying in media. “Their families are worried. In times of pandemic and at other times, they deserve to know that their loved ones are safe and healthy.”

Senior CPI (M) leader Mohammad Yousuf Tarigami while expressing grief urged the administration to shift his body to Kashmir at the earliest so that his family could perform his last rites. Further, in a condolence message, Tarigami extended solidarity with the bereaved family.

In his condolence message, Safavi said that he was a pillar and thinker of APHC as well as a powerful religious scholar.

Dal Khalsa on Wednesday also expressed their grief over the demise of Chairman of Theerek-e-Hurriyat Mohammad Ashraf Sehrai. Leaders of Dal Khalsa as per a statement issued to a local news agency expressed their condolences on Sehrai’s death.

“The All Parties Hurriyat Conference claimed Sehrai, suffering from multiple ailments, was left unattended despite requests by his family for medical attention,” Hindustan Times reported. “However, officials rejected the allegations as “baseless”, saying he was taken to hospital after he complained of health issues.”

“Sehrai was detained under PSA last year and his habeas corpus petition is still pending disposal before the J&K high court at Srinagar,” Hindustan Times quoted the statement of Kashmir High Court Bar Association saying. “The council for Sehrai had filed three applications before the court for shifting him from Jammu jail, hospitalisation owing to ill serious heart ailment and meeting with the family members.” However, no orders were passed on the three applications.